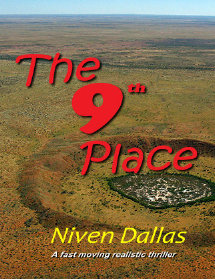 Website built by Niven Dallas
Areas and places in
Australia, mentioned
in The 9th Place and the
authors other novels.

Yes, The 9th Place is a spooky story, but one I know you will like. When we look up at night to a sky full of stars, everyone asks the same question, are we alone? Some may go a step further wondering was this all planned, and why?
Others will take the time and effort to try find out... why.
I did...this novel is the result of my extensive research.
A Few Facts
The Australian continant, is the worlds largest island, and about the same size as continental America, but with far less guns. Aus murder rate is only 1.2 per100k compared with the USA at 6.3 per 100k.

Australias 7,686m sq km land mass is home to only 22m population, 98% of which live around the continants vast coastline.